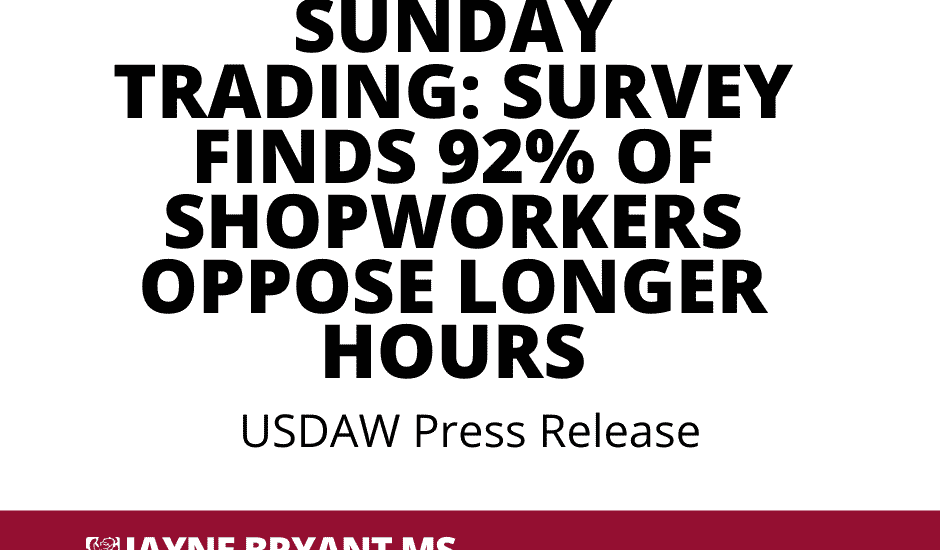 Shopworkers’ trade union Usdaw has surveyed over 11,000 retail staff in England and Wales following reports that the [UK] Government is planning to deregulate trading hours allowing large stores to open all day on Sundays. The online survey conducted over the last week found that:

• 92% opposed large shops opening for more than 6 hours on a Sunday.

• 66% feel they are pressured to work on Sundays.

Usdaw is opposing any changes to the existing regulations and is working as part of a Keep Sunday Special coalition.

Paddy Lillis – Usdaw General Secretary says: “Reports that the Government is yet again looking at deregulating Sunday trading were met with dismay and disbelief by our members who are on the frontline of delivering essential services during the Coronavirus emergency.

“The Government claims it will help the country out of recession, but that is wrong, misguided and a slap in the face for key workers. Shops can already open for 150 hours a week, adding a few more hours will not make a difference, but could be very damaging to shopworkers’ lives, our communities and the retail sector.

“This move to deregulate Sunday trading hours appears an opportunistic use of the Coronavirus crisis. I would hope that the Government would instead spend its time exploring how we can ensure that these low paid key workers can get the level of pay and job security they deserve.

“Longer Sunday working would have a big impact on shopworkers, which is why over 90% of our members remain opposed. Usdaw’s survey shows that nearly 80% already have to work on Sundays and two-thirds are under pressure to work on Sundays when they don’t want to. Only 3% of shopworkers wanted to work more hours on Sundays, with over half wanting to work fewer.

“We appreciate a desire to help the retail sector, but this attempt to undo a long-held and workable compromise on Sunday trading is misguided. Usdaw members do not want to see longer Sunday trading hours, especially when shopworkers are under huge pressure because of the crisis. Shopworkers need a break on Sundays, not longer opening hours. We urge the Government to reject extending trading hours and to focus on supporting the retail sector.”