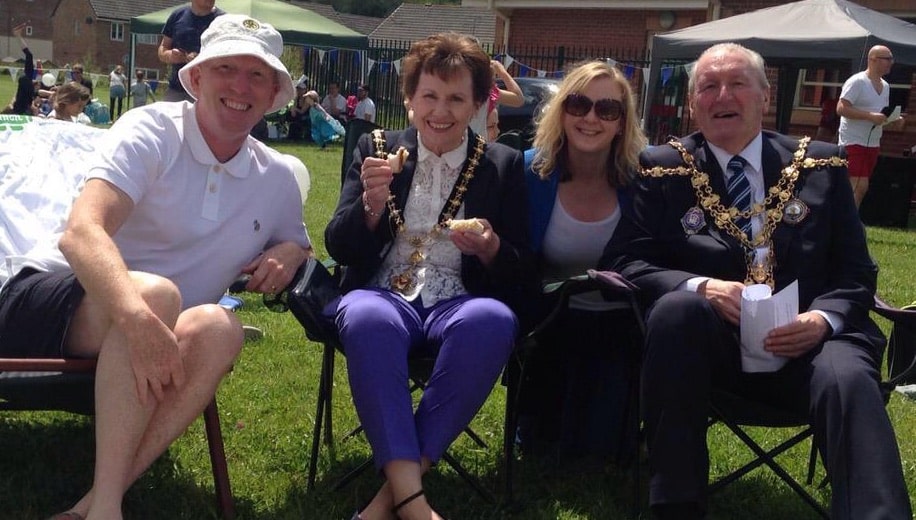 What a perfect day for a picnic!

Hundreds of residents in Afon Village gathered together in the grounds of the Rivermead Centre.  A chance to enjoy the sunshine and have a chat with neighbours.
I used to live in Rogerstone and know there is a huge amount of community feeling.  However it’s not always easy to get together.  Particularly during the winter months when you don’t get a chance to stop and talk with neighbours.
This project is a great way to bring people who live so near to each other together.  Hopefully it goes a way to helping to make our communities stronger.
The Afon Village Big Lunch had community spirit by the bucketful.  The superb Rogerstone Band were on top form, followed by music from Newport City Radio.  The MUGA was well used by the kids with adults taking turns to volunteer to referee matches.   There was Zumba, craft workshops and story telling. Something for all ages.
The Mayor and Mayoress, Cllr Herbie Thomas and Jacquie Mitchell, joined the residents.  Well done to those who organised, particularly Janice Rees and Jillian Thomas.  It was even better than last year and that’s saying something! It’s great to see the event supported by Rogerstone Labour.
The Big Lunch is a national project funded by the Big Lottery and supported by Halifax and ASDA. It started in 2009 with the aim of getting as many people as possible to have lunch with their neighbours in an act of community.  The simple first step of sharing lunch together can start to change how people feel as part of their wider community. Six years on, thousands take place across the country with eight out of ten people saying they have kept in touch with the neighbours they met.  Let’s hope it’s the same ratio in Rogerstone.